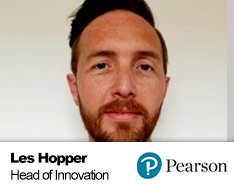 Les Hopper is the Head of Innovation, PEARSON. He completed Royal Holloway’s MSci in Geosciences in 2004. Following graduation, Les was employed as Geology Warden at the Charmouth Heritage Coast Centre on the Jurassic Coast, a job that involved renovating the museum, leading fossil hunting trips, and working with local collectors.

Since 2006, Les has mostly worked in science publishing, first joining Heinemann as a Science Editor in their schools team, then serving as Commissioning Editor for Pearson Education, before finally running my own team as Science Publisher at Oxford University Press (OUP). During this latter career phase, Les helped turn OUP Science into the UK No. #1 before also taking over the Maths team as Head of STEM Publishing.