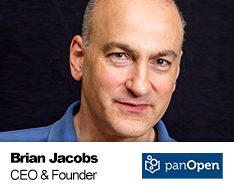 Brian Jacobs is the CEO and Founder at panOpen, a company that provides the digital infrastructure to support and promote the use of Open Educational Resources (OER). He is also the founder of Akademos, a company that focuses on new models of distributing physical and digital course materials. Prior to education entrepreneurship, he was in academia: Visiting Assistant Professor, Department of Government, Cornell University, and Visiting Fellow, Institute for German Cultural Studies, Cornell University.  He has also received fellowships from the Mellon Foundation, University of Goettingen, and Yale University, and published various articles and essays in political theory and philosophy, including the book Essays on Kant’s Anthropology, (editor and contributor), Cambridge University Press. More recently, he has published articles with EdSurge and Inside Higher Ed concerning the growing market for OER. Brian earned a Bachelor’s degree with honors in English and political science at the State University of New York at Albany, and a Master’s and Doctorate in political philosophy and social theory at Cornell University.